There have been many occlusal schemes for edentulous patients and all appear to be challengeable. Unlike removable partials that have abutements, upper and lower dentures are a challenge unto themselves. Many reasons have been cited for success or failure. It is generally accepted that by reducing cuspal interference and attaining occlusal harmony, there will be less adjustments and likely contribute to patient satisfaction. Dr. Frusch promoted the Swissedent system which emphasizes a single linear masticating cusp on the lower mandible which is opposed by a flat occlusal surface on the maxillary. (Figures 1 and 1A)

The concept of lingualized occlusion is similar to the Swissedent linear single cusp technique, except that Swissedent has eliminated all cuspal interference by having the flat occlusal oppose the linear shearing cusp. (Figure 2) shows these unique teeth in lateral excursions. Dr. French designed a similar posterior with the emphasis on a linear single cusp on the lower mandible opposed by a modified flat occlusal surface. Since then many variations of zero plane teeth with opposing flat surfaces were introduced. Dr. McGrane introduced a posterior tooth that appeared to be anatomical from the buccal view (Figure 3) but occlusally functioned in a zero degree plane in bi-lateral excursions. (Figures 4 and 4A) I regret that these concepts no longer exist.

A zero degree cusp does not require a compensating curve but should be in harmony with the condyle setting on the articulator. It is easier to do so if you are using a Hanau type of articulator with condyle settings. (Figure 5) I totally agree that the emphasis on lingualized cusps are important but it does not guarantee a balanced occlusion. I am from the old school where balanced occlusion in protrusive and lateral excursion were something to be reckoned with. I am referring to the days before implants, porcelain metal and ceramic veneers were introduced. 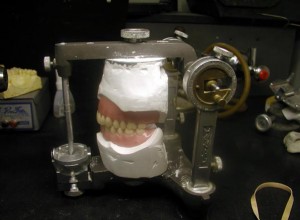 Technicians emphasis were on full dentures and partials. More time was spent on setting teeth for full dentures. Technicians would take pride in acheiving balanced occlusion with their setups. It takes a skilled technician to accomplish this with conventional 20 or 30 degree posteriors. There were many technicians who mastered this art. Just as partial technicians are becoming scarce, full denture setup technicians who have the ability to balance full upper and lower dentures with 20 or 30 degree posteriors have also declined. During bi-lateral excursions, in a truly balanced setup, the lingual of the upper posteriors contact the lower buccal cusps during the right excursion and the buccal cusps of the upper posteriors slide interproximally through and over lower buccal cusps during the left excursion. (Figures 6 and 6A) 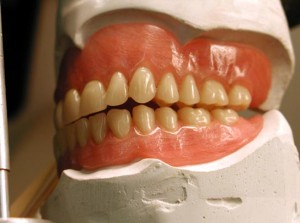 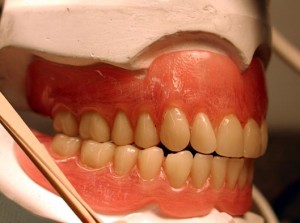 Two edentulous typodent models were selected to illustrate how to acheive a balanced setup. (Figure 7) 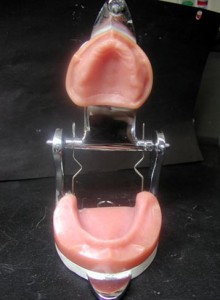 When using anatomical teeth, the curve of spee (compensating curve) depends on the cuspal inclination. Example (20 or 30 degree teeth). I have found 20 degree teeth to be easier to achieve a balanced occlusion. Although all lower posterior teeth have to be set on the ridge, there are times when a slight lingual position is indicated. After transferring the incisal and high lip line markings from the dentist, mark the approximate position of where the lower posteriors will be set. (Figure 8) Setup anteriors. (Figure 9) The upper posterior setup is then completed and adjusted as needed. The uppers should be set with the emphasis on having the lingual cusp slightly lower than the buccal cusp.

Setup completed and waxed for try in with right and left views (Figures 11 and 11A).

View of waxed setup in lateral excursions (Figures 12 and 12A). After processing, the upper and lower cases are dug out (not separated from the model at this time) and put back on the articulator. The occlusal is checked and adjusted accordingly Adjustments will vary depending upon the acrylic and technique used in processing. Flexite MP is recommended because volumetric changes and adjustments are minimal. (Flexite MP is a monomer free thermo injected multipolymer acrylic)